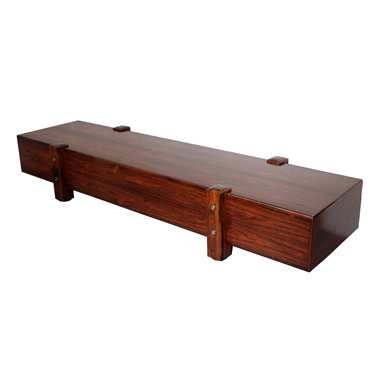 Sergio was a furniture designer and architect. In 1947, he started college at Faculdade Nacional de Arquitetura da Universidade do Brasil, in Rio de Janeiro. In 1949 he worked as an assistant professor of David Xavier de Azambuja, that invited him n 1951 to be part of the Centro Cívico de Curitiba project. He graduated in 1951.

In 1955, he quit Forma and moved back to Rio, where he started working on the idea to create a space for production and marketing of Brazilian design, and this idea became real with Oca, in 1955. During the 1950’s, he created Mole armchairs, with Lucio Costa and Oscar Niemeyer. From 1959 and 1960, he did his first studies of SR2 – Sistema de Industrialização de Elementos.

With a variation of Mole, he got first prize at Concorso Internazionale del Mobile, in 1961, in Cantu, Italy, chose among 400 guests from 35 countries. This award gave him international projection for his furniture design career. The armchair was produced in Italy and sold to many countries with the name Sheriff.